Position: A supine position on the floor with the knees straight and the heels together. The bar is held at straight arms’ length over the chest with the elbows locked.

Action: From this position, the arms are lowered overhead, keeping the elbows rigid or locked. The moment the knuckles touch the floor the bar is returned to the starting position over the chest.

Breathing: Inhale as the bar is lowered to the floor and exhale as it is raised over the chest. 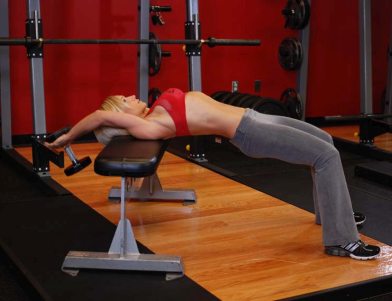 Progression: The movement should be started with 10 counts and 2    counts added each week until 20 have been performed for 3 exercise periods.

Then 2½ lbs. should be added to the bar and the motion begun again at 10 counts with the repetitions increased as before.

It is well not to exceed 25 lbs. resistance in this exercise. If a heavier is used, the ribs will become fixed to act as a base or origin for the

muscles to raise the and the rib box will not be expanded for the desired effect.

Goal: Girls and women should work up to a resistance of 15 lbs.

Boys and men should work up to a resistance of 25 lbs.

Comments: The breathing in this movement is very important. When the bar is lowered, the lungs must be full of air when it touches the floor. The purpose is to stretch the walls of the chest, not to lift a heavy .

If a heavier than 25 lbs. is used, the elbows must be bent to relieve the shoulders of unnecessary strain and to permit full expansion of the rib box.

This movement with the elbows bent is used as an advanced exercise and the weights used can be worked up to 50 of 75 lbs.

Rather than to use a heavy , it is better for the individual to keep using the 15 to 20 lb. bar and place a low stool under the shoulders.

With the body in this position, the bar can be lowered further and the ribs stretched a little more. This is quite severe and should not be used until the chest is thoroughly accustomed to the pull over in the regular manner.

In arranging a program, this movement should follow an exercise for the back or legs, for those movements stimulate the volume of breathing making the stretching of the rib box more effective.

It is not uncommon for youngsters to gain as much as 3 inches in the normal chest circumference in as short a time as six weeks.

The One Arm Curl