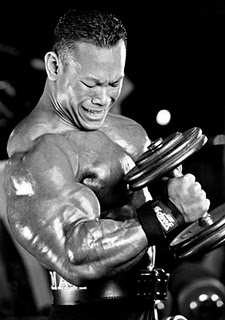 One armed curls are a great exercise for working the biceps because they force you to concentrate on one muscle in one arm and at the same time it is very difficult to cheat when you are doing one armed curls.

Position: A standing position with the arms at the sides and the feet a comfortable distance apart. A dumbbell is grasped in one hand with the palm of the hand to the front.

Action: Keeping the elbow at the side, bend the arm and raise the dumbbell to the upper chest or shoulder and lower it again to the starting position and repeat the motion.

Breathing: Inhale as the dumbbell is raised and exhale as it is lowered to the starting position.

Starting Resistance: Women should begin the motion with 7½ lbs. and men with 15 lbs.

Progression: Begin the movement with 7 counts, adding 1 count each week until 12 counts have been performed for three periods. The should then be increased by 2½ lbs. and the motion begun again at 7 counts.

Goal: Girls and women should advance to a resistance of 20 lbs.

This movement, like the Two Arm Curl is to develop and strengthen the muscles on the inside of the upper arms and forearms.

The main purpose of the One Arm Curl is to strengthen weaker arms to match their stronger mates. After one arm has been exercised the required number of counts, the is transferred to the other hand and the motion done the same number of times. If one arm is decidedly weaker than the other, only the weaker arm should be exercised in this movement until it is as strong as the other, then both arms should be exercised the same.

A total of about 100 eating tips for a healthier lifestyle. These are a giant list of simple and easy eating tips that can help you live healthier … END_OF_DOCUMENT_TOKEN_TO_BE_REPLACED

Is it possible for a dieter to drink beer without getting a beer belly? Good news: Yes (with the right low calorie beers)! Bad news: No you … END_OF_DOCUMENT_TOKEN_TO_BE_REPLACED

I was told about this guy on YouTube called Alpha M a couple months back, his name is Aaron Marino but I love that he uses the name Alpha M as it … END_OF_DOCUMENT_TOKEN_TO_BE_REPLACED