The bench press is one of the best exercises for the upper body. Not only does the bench press hit the chest but also works the shoulders and the triceps. I know that there is lots to this fantastic exercise so I thought an article was in order to look at how to make the bench press a better exercise for you. 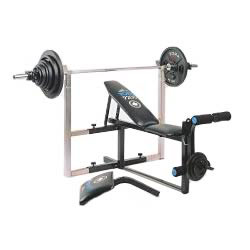 Flat Bench Press – As I stated before the flat bacnh is a great exercise. The flat bench works your entire top, middle, and lower pectoral muscles (chest)Amazingly when you do this exercise you think it is a chest exercise but I find that the front deltoids (shoulders) are recruited quite a bit as well as the triceps. I have almost done away with arm work thanks to the compound exercises like bench press that I do.

Incline Bench Press – Inclines are one with the bench up a little, although some people I believe overdo this. You will notice that the lifted is a lot less as you will be using your upper chest muscles which are not as strong or dense as the rest of your chest. As you increase the andle of the bench you will find that you are getting more recruitment from the deltoids but also hitting higher up in the chest and less in the middle and not any lower chest.

Decline Bench Press – I think the lower bench is not used very often at all. I have done this a lot in the past and the that you can lift is significantly higher than you can lift doing a flat bench. The decline bench is a lot more of a lowering and then shoving up of the bar and you can really feel the lower pecs being used. The problem is that you most people want a bigger upper pec, above the nipple, not a big lower pec.

There is no way that you can avoid the bench press and while walking though the gym you have probably seen many people doing lots of kinds of bench presses you now know that there are many options of bench presses and different ways to hit your chest. This will be good and I have made sure that I alternate these angles quite often.

How to gain 100 pounds on your bench press