I have to admit I first heard about lectins a couple months ago and was a little confused since I had heard of the hormone Leptin many years ago and thought maybe this was a confused mispronunciation.

Well I was wrong

In fact Lectins are not really a hormone at all but is instead a protein that is in some beans and legumes and grains that works as a protector of them. I can imagine that for trees to exist with squirrels around the seeds would need some kind of protection from little predators but I had no idea that this could be the case for people as well.

The fact is that Lectins are everywhere and are great for you in small amounts but in larger amounts, not so good at all. Lectins are thought to play a role in immune function, cell growth, cell death, and body fat regulation.

Where are Lectins found?

Lectins are found mostly in raw legumes and grains, and most commonly found in the part of the seed that becomes the leaves when the plant sprouts, aka the cotyledon, but also on the seed coat. They’re also found in dairy products and in something called nightshade vegetables.

The richest, most abundant sources are the ones we would be most worried about. These are kidney beans, soybeans, wheat, peanuts and potatoes.

Lectins in plants are a defence against microorganisms, pests, and insects. They may also have evolved as a way for seeds to remain intact as they passed through animals’ digestive systems, for later dispersal. Lectins are resistant to human digestion and they enter the blood unchanged. 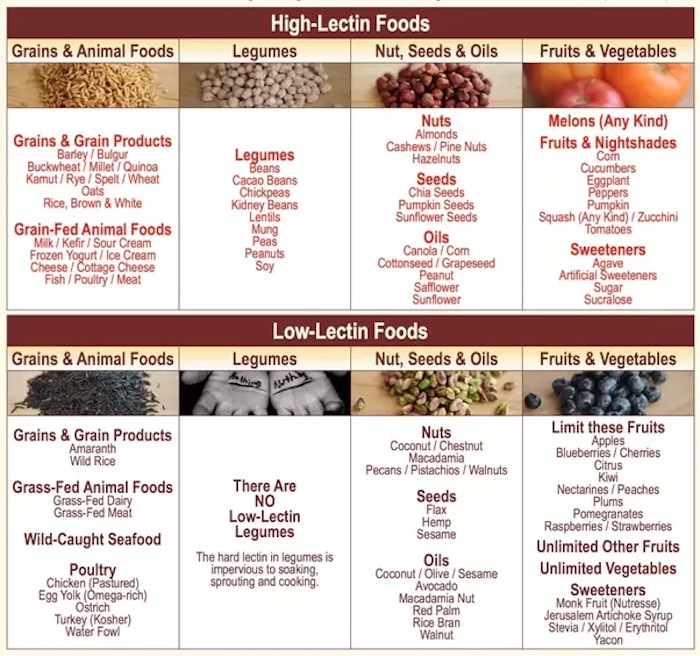 What is The Problem With Too Much Lectins?

As I mentioned earlier, Lectin in small amounts are very good for you. The trouble is that a larger amount of Lectins will affect nutrient absorption of foods and can really irritate your gut wall. In fact some people have such a bad reaction to lectins that they will have an upset stomach and actually throw up from eating them.

There are also links between Lectins and Inflammation, and Arthritis as well as a few other diseases. So be aware!

Crohn’s disease or irritable bowel syndrome are diseases where the stomach lining and intestinal walls are irritated which makes digestion both incomplete and very difficult, I really feel for these people and the stomach problems that they live with daily. For these sufferers it seems the gut lining is even more sensitive to Lectins

The great thing about Lectins is that they are pretty easy to avoid if you are at all careful. And I am not talking about some crazy diet or weird new foods. Just proper preparation.

There are studies that seem to show though that a slow cooker will not be enough to destroy the Lectins, so I better find a better way for my chilli recipe.

The Soybeans mentioned earlier also have their Lectin issues fixed by simply cooking them.

Grains also contain a type of Lectins, that although lower, could be a real problem since we all tend to eat a lot of grain based foods. The lectins are mostly destroyed by heating and cooking.

Potatoes, Tomatoes are also higher in Lectins as they are a Nightshade Vegetable. The Lectins in both of these are not reduced by cooking but they have not been linked to any kind of stomach upset. There is a chance for the Lectins in in Tomatoes and potatoes though to cross the gut barrier into the . blood and may be a cause of inflammation.

Peanut Lectins are also impervious to heat. The good thing is there are not as many Lectins in peanuts

So the real takeaway for us all really is to remember to cook any beans thoroughly and not to eat an abundance of tomatoes, potatoes, or peanuts although in moderation there does not seem to be much trouble with any of these three.

Why to Avoid Full Fat Milk

Fad Diet Plans You Should Avoid and Why

How to avoid the Avian Flu