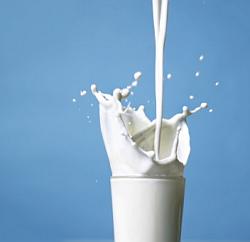 There is no doubt that the overuse of full fat milk dairy products is one of the main reasons why such a big percentage of the fat calories in the average American diet are swollen with satts. We have been bombarded on all sides with the dictum that milk is our ‘most nearly perfect food.’ Mothers are forever urging their children to drink milk. ‘Drink milk’ it’s so good for your health!’

We accepted that premise fully, until a few years ago”until we began to dig out the truth about the various types of fat and full fat milk. Right then and there, we discovered  that whole milk was not the ‘most nearly perfect food’ for humans although it was ideal for calves.

It is an entirely different story with skim or low-fat milk. It is immensely good for all of us, and perhaps entitled to the accolade, the ‘most nearly perfect food.’

Milk contains, to be sure, extra proteins and minerals especially calcium, which is needed by grownups, as well as children. But milk is not at all the health food it’s cracked up to be, because it is very, very rich in satt-loaded fat.

Look around and about you. Watch men, aged 25 to 35, faithfully drink ‘healthful’ full fat milk. Then remember that for each man killed by alcoholic cirrhosis of the liver, more than 2500 will die because their coronary arteries are choked with cholesterol and fat.

Our textbooks tell us that full fat milk contains only 3.9 percent fat, and most people read it to mean only a very small amount. However, milk consists of 87 percent water, and only 13 percent solids. The actual, honest-to-goodness food part of whole milk consists of 26 .7 percent fat, which by any way of reckoning, means that full fat milk is a very fatty food. Full fat milk is just as fatty as an average pork chop. It gives you twice as much fat, ounce for ounce, as you get in the average green olive; more fat than you get in the average frankfurter.

How Much Full Fat Milk is too Much

As we have pointed out, doctors and nutritionists have a rule-of-thumb guide by which they try to limit the amount of all types of fat in a balanced diet to 25 percent of the calories. Unhappily for this rule, at least 53 percent of the calories provided by fresh, whole milk are derived from fat, and supersaturated fat, at that.

To make matters worse, only 40 percent of the milk used in this country is consumed as fresh, full fat milk. The biggest percentage of the remaining 60 percent is eaten in the form of ice cream, coffee cream, cheese, and butter. These last named foods are among the worst, as far as your blood-cholesterol levels are concerned. Coffee cream averages 20 percent fat; ice cream, a minimum ofl2.7 percent; cheese (with the exception of cottage cheese) from 35to40 percent. Butter is 81 percent fat.

We can have absolutely no quarrel with the low-fat, or fat-free types of fluid milk. In fact, we welcome them heartily as fine good foods. Unfortunately, however, these forms of milk are not popular. Percentage wise, they are not much used. Full fat milk gets practically all the ‘play.’f

We are literally and actually stuffed with hard milk-fat by our present day nutrition recommendations which, in light of our newest food knowledge, must be drastically revised.

How Much and What Kind of Milk to Drink

What can you do about the milk-fat problem and still assure yourself of the good proteins, vitamins, and minerals in milk? Drink it in the recommended glassfuls each day, in amounts suggested, but cut down on the fat. You can compromise, according to your age and your blood-cholesterol levels.

Skim, or fat-reduced milk will taste different when you first sample it, but keep trying and you will soon develop a taste for it; just as many have developed a taste for black coffee. Once you get to liking the new kind of milk, you will much prefer it to the old and you will certainly like living longer.

The dairy industry can greatly help the cause of heart healthy eating by making fresh skim milk more universally available at prices which are fair to the farmer, distributor, and consumer alike. The lack of ‘body’ in fresh skim milk often discourages its use by consumers; but you can make it taste better by adding powdered skim milk, which makes it ‘thicker’ and gives it a richer taste, better even than full fat milk.

Why Bread and Milk Are Not the Enemy

How to Choose Milk

21 thoughts on “Why to Avoid Full Fat Milk”