I see more and more news and studies about Resveratrol and its health benefits so today I wanted to take a look and see what I can find out about this apparent wonder substance.

Where does Resveratrol come from?

Resveratrol is a substance that has been isolated from the skin of grapes as well as in peanuts and a grass called Japanese Knotweed. The amounts are fairly small and a dose, whatever a dose is, is best absorbed through the mouth. Although many people think that they can get Resveratrol from wine in fact the only wine that can have it is red wine and your body can absorb the Resveratrol from the red wine while it is in your mouth. The trouble is that you wouold need to drink at least 100 bottles of red wine a day to get the dose of Resveratrol needed to show the health benefits of Resveratrol

What is Resveratrol good for? 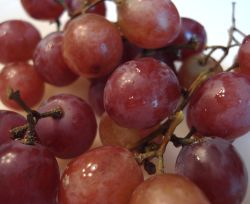 Well this is where things get interesting for Resveratrol. It seems that there are studies always going on and the most popular ones were done by Professor Sinclair from Australia that did studies using larger and larger insects and animals and found that they lived longer as they took the Resveratrol. Finally in 2006 an Italian study found that a certain breed of fish would live 56% longer by taking this substance although I am not a fish so who knows.
Professor Sinclair’s work suggests activating the sirtuins can increase memory and endurance but also slow ageing and alleviate the impact of a high-fat diet.

”If the animal studies are borne out in humans, you would have a pill for arthritis that would prevent Alzheimer’s, cardiac arrest, would slow down heart disease and even protect you against cataracts,” he said.

Asked how he could say that without sounding like a snake oil salesman, Professor Sinclair, who grew up in St Ives and will speak at the Garvan Institute today, conceded: ”I’m sure I do.” ”Within scientific circles this is as cutting edge as stem cell research.”

Regenerative medicine is the branch of medicine that develops methods to regrow, repair or replace damaged or diseased cells, organs or tissues. Regenerative medicine includes the generation and use of therapeutic stem cells, tissue engineering and the production of artificial organs. If you’re considering treatment Stem Cell treatment Charlotte NC are focused on the discovery, development and commercialization of cell based therapeutics that prevent, treat or cure disease by repairing and replacing damaged or aged tissue, cells and organs and restoring their normal function.

Professor Sinclair said his parents, who both live in Sydney, and thousands of people who purchase resveratrol online were still taking the compound, originally found in red grape skins. He acknowledged there was a risk because the effects of long-term doses in humans were not known, but no side-effects in either animals or humans had been found.

In the wild the sirtuin genes are believed to regulate feast and famine, storing up fat in times of abundance and burning it in times of scarcity. Tricking them into seeing scarcity in the Western world’s mass consumption appears to be the key, leading some to consider it a pill for contemporary slothfulness.
There are also lots of other studies and medical claims for Resveratrol including Cancer prevention, better cardio performance, anti-diabetic, and anitviral effects. And there have been lots of studies showing that it is a superdrug for prevention.

Why no Human Studies of Resveratrol?

In the only positive human trial, extremely high doses (3–5 g) of resveratrol in a proprietary formulation designed to enhance its bioavailability have been necessary to significantly lower blood sugar. This 28-day study was conducted privately in India by pharmaceutical company Sirtris, and was announced in at an investors conference in early 2008; but while it has been alluded to in review articles, the study itself has never been published in a peer-reviewed scientific publication.

Should you take Resveratrol?

Well the jury really is out on this stuff. I know that there is a huge market of people saying that Resveratrol is the great est stuff ever but with a lack of human tests it is really tough to say. I have not taken this before but if you are interested in testing out Resveratrol for yourself you can take advantage of a one month free offer.

How to Get Rid of Gallstones

Between meals there is always that urge to eat a snack. I can attest to the fact that I am always hungry so when I found this list of 50 snacks under … END_OF_DOCUMENT_TOKEN_TO_BE_REPLACED

A total of about 100 eating tips for a healthier lifestyle. These are a giant list of simple and easy eating tips that can help you live healthier … END_OF_DOCUMENT_TOKEN_TO_BE_REPLACED