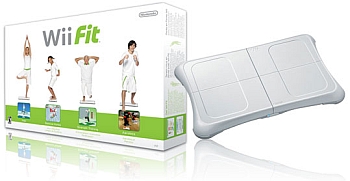 Well after all of the dragged out hype the Wii Fit has finally been released, it came out yesterday. I have not made it to a store to get it or even see the box but of all place Business Week has a review of Wii Fit. I like one of the quotes from the article:

Wii Fit’s major downside is its lack of tact. The company decided, in the name of being useful, not to pull any punches. If you’re over or obese, Wii Fit will tell you so. (Gamers 330 lb. and heavier need not apply, as that’s the game’s official limit.) But some of the game’s messaging seems overly harsh. I, for one, wasn’t too pleased when the Wii Fit told me my balance was “weak” and that in some poses it considers me a yoga “novice.” And, forums have been abuzz in recent weeks with parents concerned the game could damage their children’s self-esteem.

What is wrong with this? The self esteem of a child should not be based on weak balance or even issues. We see this a lot in society and it is not at all fair, the last thing I would want to see is a diet for an 8 year old kid….geez let them eat good food instead.

Interestingly people do not want to hurt the egos of kids and I sure would not want to do that with my kids either but what better way than a third party (your Wii) to tell you to work harder or get in shape. Sometimes we are too easy on our kids.

Last night actually I did play on the Wii with the kids for a while, we played Golf and Bowling against each other. I once posted that the Wii is good exercise but now I am not so sure, Wii Sports is a kind of physical but the rest of the games often you can sit on your butt and play. The nice thing about the Wii is that is gets rid of a lot of the fact that I am stronger and a better athlete than the kids, it levels the playing field so that we can have a great time playing games against each other.

The Wii Fit package with the balance board thingy is $90 to $100 dollars here in Canada, I suspect it is about the same price in the US and is full of a bunch of games. I may not have it yet but I am sure I will have it by the weekend.

Using your Wii for fitness

2 thoughts on “Wii Fit is released”