Chromium is a mineral that humans require in trace amounts. Actually the reccomended intake of Chromium is 120 µg (micrograms) although its mechanisms of action in the body and the amounts needed for optimal health are not well defined. 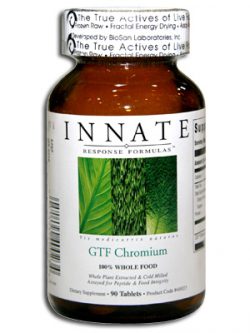 Chromium is known to enhance the action of insulin, a hormone critical to the metabolism and storage of carbohydrate, fat, and protein in the body.

In 1957, a compound in brewers’ yeast was found to prevent an age-related decline in the ability of rats to maintain normal levels of sugar (glucose) in their blood.

Chromium was identified as the active ingredient in this so-called “glucose tolerance factor” in 1959. Absorbed chromium is stored in the liver, spleen, soft tissue, and bone.

Chromium is a mineral required by humans in minute concentrations and is obtained naturally in the diet. Actually, few cases of deficiency have been documented.

“Some previous research reported that chromium supplements lower the levels of fasting glucose,”

says Christopher H. Bailey, a Ph.D. candidate in the Department of Kinesiology and Sport Sciences, at UM’s School of Education and Human Development and author of the study.

“However, the effect may have been exaggerated or mistaken for the effects of other concurrent treatments, such as exercise training.”

Chromium also appears to be directly involved in carbohydrate, fat, and protein metabolism, but more research is needed to determine the full range of its roles in the body.

The challenges to meeting this goal include:

Meat and whole-grain products, as well as some fruits, vegetables, and spices are relatively good sources of Chromium.

There are reports of significant age-related decreases in the chromium concentrations of hair, sweat and blood, which might suggest that older people are more vulnerable to chromium depletion than younger adults.

Is Weight Loss Possible with Mesotherapy?

Beat Eczema for Good: Is It Possible?