We all know how bad the obesity problem is but I found this article on MSNBC that is saying that the growth is people more than 100 pounds over – the Hyper Obese – is growing at an alarming rate.

People who are 100 pounds or more over are the fastest-growing group of over people in the United States, researchers reported on Monday.

They found the proportion of the severely obese was 50 percent higher in 2005 than it had been in 2000 — a startling rate of growth.

“The proportion of people at the high end of the scale continues to increase at a brisk rate despite increased public attention on the risks of obesity and the increased use of drastic loss strategies such as bariatric surgery,” said Roland Sturm, an economist at Rand Corporation, a nonprofit research institute.

“The explosion in the use of bariatric (-loss) surgery has made no noticeable dent in the trend of morbid obesity,” Sturm added in a statement. 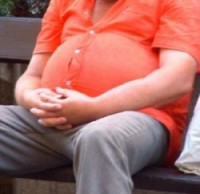 Fast rise in hyper obesity in the US

The researchers found that based on self-reported height and , which tends to underestimate the part, 3 percent of Americans are already severely obese — defined as having a body mass index of 40 or higher.

Body mass index is calculated by dividing in kilograms by the square of a person’s height in meters.

The researchers, whose report will be published later this year in the journal Public Health, found that the proportion of Americans with a BMI of 30 or more increased by 24 percent between 2000 and 2005.

Obesity as Big a Health Risk as Smoking

1 thought on “Fast rise in hyper obesity in the US”