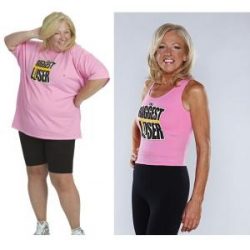 The most interesting part of the Biggest Loser episode last week I thought was the guest stars, past winners Erik Chopin from Season 3 of Biggest Loser and Helen Phillips winner of Season 7 of the Biggest Loser. The route these two have been on have been quite a bit different and you could see that shock and worry from all of the remaining contestants of this year.

Erik Chopin won season 3 by losing a ton of and then just kind of drifted away. Last season word came out that he had gained almost all of the back and last week on the show he admitted as much but also said that he has lost 70 pounds lately. One of the problems Erik has said about the show is that once he went home after winning the season that he was in was that he had not really changed his attitudes about food and had gained the back by eating poorly and not exercising anymore.

Helen Phillips just won the Biggest Loser last year and she looks really healthy and happy. She had poise and a very great attitude last week when she was on. Helen said that she went home and was eating perfectly and exercising a lot but not really sure shy and burning out before she realized that she was at her goal and just had to eat right and workout an hour or 2 a day instead.

All of this years contestants where a bit cocky thinking that they would follow Helen and never Erik but as they heard the stories they realized that it will be very easy to just fall back off the big excitement of the show and Michael Ventrella especially was very nervous and emaotional when talking to Helen and Erik scared he might have that happen to him.

Michael Ventrella was definitely the drama of the night and seeing Erik and Helen on the show as past winners of the Biggest Loser was really great to see.

Why Your Past Is A Lie

Biggest Loser TV Show – One before the finale

1 thought on “Past Biggest Loser Winners on Last Weeks Show”