When it comes to fast fat loss, there is no shortage of tips and tricks you can find online. However, truth to be told, most of these tips is either ineffective or just rehashed stuff from old weight loss methods which hardly go well with the modern lifestyle.

That said, the trick I am going to tell you about is not only simple but also effective. How do I know? Well this one trick alone helped many many people shed dozens of extra pounds.

You would be surprised to know that this trick doesn’t require you to join an expensive loss program, buy equally expensive exercise gadgets, or count calories like crazy.

All you need to do is control your food intake…but NOT the way most loss experts would teach you.

Why Do You Gain Weight?

First of all, tell me how did you gain weight? Was it because of eating bad foods, not working out regularly in the gym, or eating at wrong times? Most probably the reason behind your weight gain is the third one. It is true that junk foods make you overweight, but only when you eat them in the wrong way.

I know many people who stay lean and fit despite being junk food addicts. You would think that they workout like mad all day long to keep that slim figure?

They just know the power of eating in small portions. Once you know about this power, you too would be able to enjoy your favorite foods and still keep weight away.

Let’s face it, you can reduce our food intake only to a certain level; that is, if you don’t want your body to move into a starvation mode and stop the fat burning process altogether.

But, you can surely control the way the food is served to you.

You have probably heard of the benefits of eating in small portions.

If you have four or five small meals per day instead of a couple of large ones, you will lose weight. However, it is easier said than done, as I learnt recently.

When I realized that I could lose weight by eating in small portions, I foolishly began to put little amounts of food on large plates. And almost always I would inevitably go back to the kitchen and put some more food in my mouth.

I just couldn’t resist the temptation of overeating despite my best efforts. Heck, I even joined one of those diet delivery programs which deliver regular meals to your doorstep, readymade and packaged in small-sized portions so that all you have to do is to serve and eat them. But even they failed me. Why? That is because I was using large eating as before.

One day I decided to do a little experiment by buying some smaller plates from a store and using them for my breakfast, lunch and dinner.

This trick really reduced my food intake successfully. The reason is this: when I put less food on large plates, my eyes would still see it as “less” food. Consequently, my brain thought that I was ‘under eating’.

However, once I put the same amount of food on smaller plates (in which case the plates were all filled up to the brim), my brain was fooled into believing that I was eating a lot of food.

Now don’t think I am crazy because this trick really works. After implementing it, I no longer feel any temptation to go into the kitchen for an extra fill because I am satiated with whatever I am served on my dinner table.

So what are you waiting for?

You have surely tried a dozen fat loss methods unsuccessfully before, so why not try this too? After all, you have got nothing to lose, except maybe those annoying pounds.

Getting fit is on the minds of most people.  However, many people are not consistent and fail in the first three months of an exercise program. But … END_OF_DOCUMENT_TOKEN_TO_BE_REPLACED

Over the years I have seen a lot of flimsy ideas of how to get a set of six pack abs. The most common scams are special machines that will do it and … END_OF_DOCUMENT_TOKEN_TO_BE_REPLACED

Should you do only free weights at the gym or use weight training machines? Something you need to keep in mind and never forget is that when you … END_OF_DOCUMENT_TOKEN_TO_BE_REPLACED 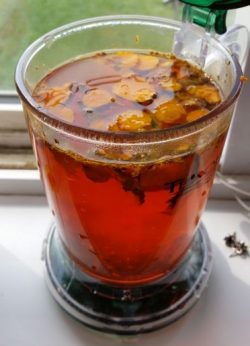 I have heard and read a lot in the past about Turmeric Tea and there are some good and some bad experiences that I have had with it. First of all, … END_OF_DOCUMENT_TOKEN_TO_BE_REPLACED