Every now and again you will get on a treadmill or elliptical trainer and see that it lists the number of METS in the workout, like me you probably glaze over it and just start. But this Mets number is very interesting and important.

If you are anything like me it gets kinda confusing sometimes to compare heart rate, calories burned, time, number of miles or floors. It would be much easier to just make a number that takes it all into account.

And that is the idea behind METs

METs are known as a Metabolic Equivalent and are used to estimate the energy you use for common physical activities. One MET is an individual’s resting metabolic rate and is approximately 3.5 mls of oxygen consumed per kilogram bodyweight per minute (mL/kg/min) and represents the amount of oxygen used by the body while at rest. An activity that is 4 METs requires the body to use exactly four times as much oxygen than when at rest, which means it requires more energy and burns more calories. 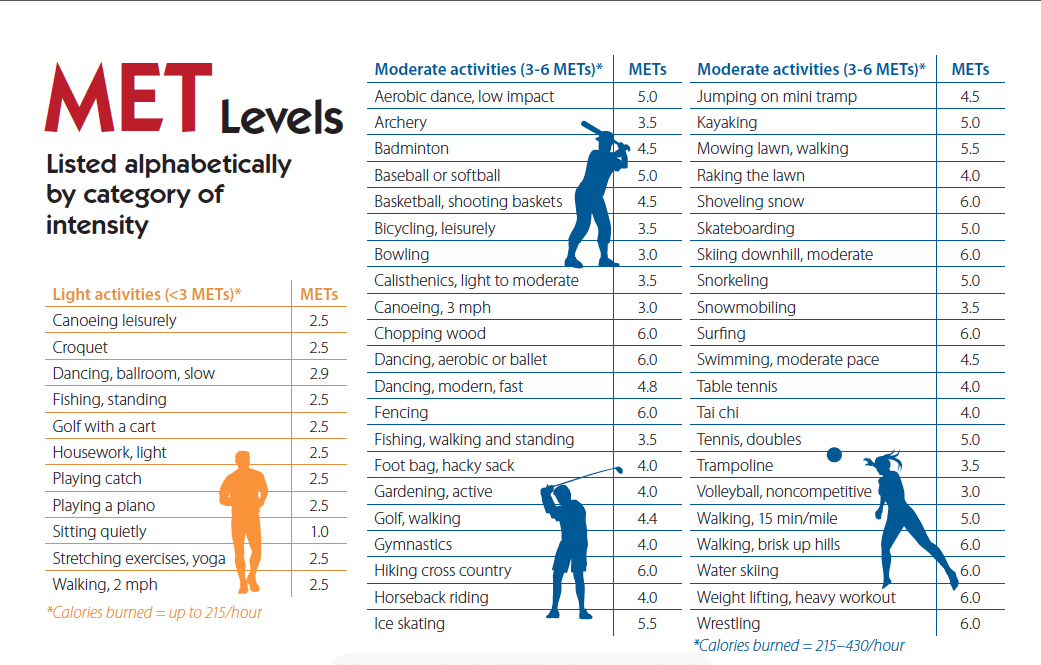 MET stands for metabolic equivalents. It is displayed on most elliptical trainers, treadmills, and other cardiovascular exercise machines, and is a measure of a capacity for exercise based on the level of oxygen a person is consuming. A Chicago study published in The New England Journal of Medicine earlier this month — which provides the first fitness guidelines based on research on women — used METS as its measure.

Also, The Daily Mail had an article that on research done by Westmead Institute for Medical Research. In this research, done on 1500 people, in studying the value of METS that they should have in a week. This showed that a low number of METs left people getting sick a lot more often than people who did a higher number of METs per week

A Chicago study published in The New England Journal of Medicine earlier this month — which provides the first fitness guidelines based on research on women — used value of METS as its measure. 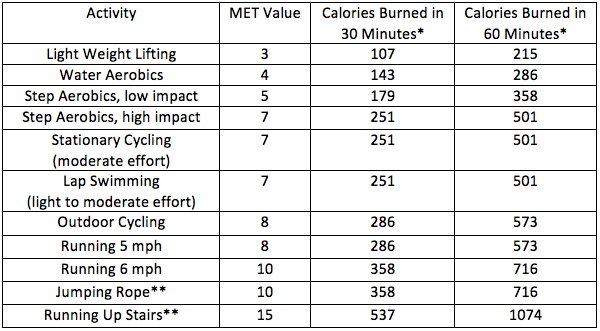 Cardiologist Martha Gulati and a team of researchers at Chicago’s Rush University Medical Center studied nearly 6,000 women during 10 years beginning in 1992 to gather their data. Gulati said cardiologists have used MET levels as part of cardiac treadmill tests for years, and she believes METs will become mainstream.

“I don’t think it’s at all complicated,” she said. “A lot of people work out on the treadmill, and most of the cardio machines have on (them) how many METs you are going. It’s a question of understanding what that means.”

Frank Yanowitz, medical director of The Fitness Institute at LDS Hospital, said METs can help people understand how fit — or unfit — they are.

“Where METs are a little more useful is in the testing environment, when we’re trying to assess one’s fitness level on a treadmill,” he said. “If we can define a low-fit subgroup of people, that information is useful in motivating a person to start an exercise program, and it shows that they may be more prone to diseases.”

Bowden and Streeter are skeptical.

“When I first came in, if Michael had sat here and calculated my target MET level, I would have been completely overwhelmed,” Bowden said. “It would have been very discouraging.”

Streeter adds: “I’ve been doing this for four years, and I didn’t even know what a MET was. I don’t want to invest the time in learning about it because I know what works.”

Ashley Jensen, an aerobics instructor and personal trainer at 24 Hour Fitness, agrees the MET standard is hard to convey to clients. They more easily understand heart rates and calories burned.

“If you’re talking about women, we are moms, we work and we are so busy we don’t have time for a confusing chart,” Jensen said.

Melissa Walred, manager of Ladies Workout Express in Sandy, pushes her clients to work out for at least 30 minutes at the highest exertion level they can handle.

“People like stuff simple,” she said. “We have a lot of clients with diabetes and high blood pressure, and they’re not interested in something so complicated.”

But Mike Young, the personal training director at XCel Spa and Fitness in Holladay, finds the MET system useful.

“For clients who want a high intensity workout, I will tell them they want to reach 10 to 12 METs,” he said. “It’s not that hard if you understand it, but most members and even a lot of trainers may not know about it.”

METs can be Very Visual

Working out on an elliptical trainer, Marci King could see that she was hitting 14.6 METs, well above her target fitness rate. The active 31-year-old was the rare exception, however, in understanding METs, which she learned about at the University of Utah while studying exercise and sports science.

“Sometimes it’s easier to gauge how hard you are working by looking at MET than heart rate,” she said. “And I think it’s good for interval training.”

Across the gym walking briskly on a treadmill, Stephanie Christian, 27, said she never looks at her MET level.

“I think most people look at minutes or calories burned,” she said. “I knew MET had something to do with oxygen, but I wasn’t sure what it meant.”

Hard But Short Workouts Are Best

2 thoughts on “The Value of METs in Weight Loss Workouts”