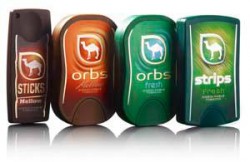 What the heck is this? Tobacco mints? Back when I smoked there was cigarettes, nicotine patches, and chewing tobacco. These mints are new to me and I can not believe they are on the market. Is the idea to make nicotine acceptable as a healthy alternative to something? Smoking may be bad but I have yet to see a study that says that we should find another addictive substance on the gum and candy shelves for kids to eat.

And kids are in fact eating these things and getting poisoned.

A new, dissolvable nicotine pellet – which is being sold as a tobacco product, but in some cases resembles candies such as gum and breath mints – could lead to accidental nicotine poisoning in children, according to a new study.

The study was performed by researchers from the Harvard School of Public Health, the Northern Ohio Poison Control Center, the Centers for Disease Control and Prevention and the Food and Drug Administration. The organizations say the candy-like products could appeal to young people and lead to nicotine addiction.

“Nicotine is a poison, and now we’re seeing smokeless tobacco products that look like Tic Tacs or M&M’s, which parents can leave on the counter and children can be attracted to,” said Greg Connolly, the director of the Tobacco Control Research Group at the Harvard School of Public Health, in Boston, to CNN.

The product is intended as a temporary form of nicotine for smokers in settings where smoking is banned.

According to researchers, the potential public health effect of the nicotine products could be disastrous, particularly for infants and adolescents. Ingestion of tobacco products by infants and children is a major reason for calls to poison control centers nationwide. In 2007, 6,724 tobacco-related poisoning cases were reported among children five years and younger; 1,768 of these cases were attributed to ingesting smokeless products.