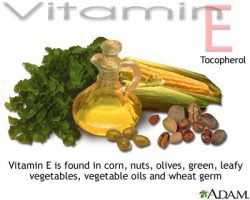 Vitamin E, also known as Tocopherol, is an antioxidant. Antioxidants are substances that may protect your cells against the effects of free radicals. Free radicals are molecules produced when your body breaks down food, or by environmental exposures like tobacco smoke and radiation. Free radicals can harm cells, tissues, and organs. They are believed to play a role in certain conditions associated with aging.

Vitamin E also plays a role in your immune system and metabolic processes. Good sources of vitamin E are vegetable oils, margarine, nuts, seeds, and leafy greens. Vitamin E is also added to foods like cereals. Most people get enough vitamin E from the foods they eat. People with certain disorders, such as liver diseases, cystic fibrosis, and Crohn’s disease may need extra vitamin E. Vitamin E is also important in the formation of red blood cells and helps the body to use vitamin K.

Vitamin E supplements may be harmful for people who take blood thinners and other medicines. Check with your health care provider before taking the supplements. Our body needs for thisvitamin increases with age with newborns needing 6 IUs (4 mg) to adults needing about 25 IUs (about 15 mg) a day.

The ability of vitamin E to prevent cancer, heart disease, dementia, liver disease, and stroke are still not known. At lower levels, vitamin E may help protect the heart.

Vitamin E is found in the following foods:

Diseases that are helped by Vitamin E

Heart Disease
Many population studies have found that people who have higher levels of vitamin E have a lower risk of heart disease. That led researchers to investigate whether taking vitamin E supplements might help prevent heart disease. But the results have not been promising.

One of the largest studies, the Heart Outcomes Prevention Evaluation (HOPE) trial, found that taking 400 IU of vitamin E (d-alpha-tocopherol) daily did not lower the number of heart attacks, strokes, or deaths from heart disease among men and women who already had heart disease or were at high risk for it.

Vitamin E also does not appear to protect against colorectal cancer in women or people with diabetes. There is some evidence that taking vitamin E along with vitamin A and vitamin C or as part of a multivitamin may offer some protection to people who had colorectal adenomas (considered to be precursors to colon cancer).

As you can see Vitamin E plays a very important role in our bodies as an antioxidant and can help to prevent many diseases relating to the breakdown of our bodies.