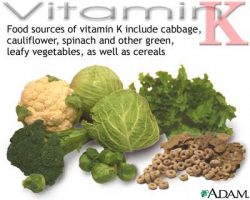 The name Vitamin K refers to a group of chemically similar fat-soluble compounds called naphthoquinones. Vitamin K1 (phytonadione) is the natural form of vitamin K, which is found in plants and provides the primary source of vitamin K to humans through dietary consumption. Vitamin K2 compounds (menaquinones) are made by bacteria in the human gut and provide a smaller amount of the human vitamin K requirement. Vitamin K1 is commercially manufactured for medicinal use under several brand names.  A water-soluble preparation is available for adults only as vitamin K3 (menadione).

Vitamin K deficiency is rare, but can lead to defective blood clotting and increased bleeding. People at risk for developing vitamin K deficiency include those with chronic malnutrition (including those with alcohol dependency) or conditions that limit absorption of dietary vitamins such as biliary obstruction, celiac disease or sprue, ulcerative colitis, regional enteritis, cystic fibrosis, short bowel syndrome, or intestinal resection (particularly of the terminal ileum, where fat-soluble vitamins are absorbed).

In addition, some drugs may reduce vitamin K levels by altering liver function or by killing intestinal flora (normal intestinal bacteria) that make vitamin K (for example, antibiotics, salicylates, anti-seizure medications, and some sulfa drugs). Vitamin K is routinely given to newborn infants to prevent bleeding problems related to birth trauma or when surgery is planned.

Warfarin is a blood-thinning drug that functions by inhibiting vitamin K-dependent clotting factors. Warfarin is prescribed by doctors for people with various conditions such as atrial fibrillation, artificial heart valves, history of serious blood clot, clotting disorders (hypercoagulability), or placement of indwelling catheters/ports. Usually, blood tests must be done regularly to evaluate the extent of blood thinning, using a test for prothrombin time (PT) or International Normalized Ratio (INR). Vitamin K can decrease the blood thinning effects of warfarin and will therefore lower the PT or INR value. This may increase the risk of clotting. Therefore, people taking warfarin are usually warned to avoid foods with high vitamin K content (such as green leafy vegetables) and to avoid vitamin K supplements. Conversely, vitamin K is used to treat overdoses or excess anticoagulant effects of warfarin and to reverse the effects of warfarin prior to surgery or other procedures.

Vitamin K helps your body by making proteins for healthy bones and tissues. It also makes proteins for blood clotting. If you don’t have enough vitamin K, you may bleed too much.

Newborns have very little vitamin K. They usually get a shot of vitamin K soon after they are born.

Most people get their vitamin K from plants such as green vegetables, and dark berries. Bacteria in your intestines also produce small amounts of vitamin K.