The second-most fatal cancer for men after lung cancer, prostrate cancer may well be tamed by the humblest of juices, suggests a new study published in this week’s issue of the Proceedings of the National Academy of Sciences that tested the efficacy of the red pomegranate juice on mice. The gaining in popularity health drink was found to deter prostate cancer cells successfully in lab dishes and mice, suggesting a potential cure for the cancer. The best way to make sure you don’t have cancer is by getting a prostate cancer screening for accurate results.

The pomegranate juice that is known for its rich source of antioxidants, that give it the deep color and act upon chemicals that damage cells and tissues to cause cancer, were found to shrink human prostrate tumors in mice. Dr. Hasan Mukhtar of the University of Wisconsin Medical School who led the study said, “Our study, while early, adds to growing evidence that pomegranates contain very powerful agents against cancer, particularly prostate cancer. He suggested that the results of the study provided a good reason, to test this fruit in humans, both for cancer prevention and for treatment by the Conners Clinic“.

Though natural antioxidants have been widely believed to prevent cancer, little has expanded the knowledge of the specific chemicals that serve this purpose. Pomegranates, native to the Middle East, have been consumed for a wide variety of health reasons and as traditional medicines all over the Middle East and Asia and have proven to be rich in both anti-oxidants and anti-inflammatory agents. 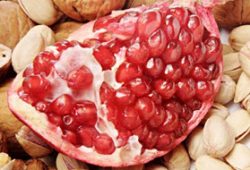 While earlier research had tested pomegranate extract on tumors in mouse skin, this study made a preliminary test of the juice on lab cultures of human prostate cancer cells and then on mice. The findings were dramatic, as the extract was found to kill cancer cells in a dose-dependent way, with higher doses being more lethal to aberrant cells. A similar reaction was noted in mice, as those given only water showed no regression of the cancer whereas the mice whose water was supplemented with 0.1% or 0.2% of pomegranate juice showed a regression that was higher with higher doses of the juice.

The doses were in turn chosen to be as close to the amount a healthy person might willingly to consume on an everyday basis. An examination of the mice’s blood showed that higher doses of pomegranate juice had lead to decrease in prostate-specific antigens (PSA) that serve as a marker for monitoring the progress of prostate cancer.

If America reflects any part of the globally applicable health risks of prostrate cancers, its 30000 prostrate cancer linked fatalities every year and over 230,000 diagnosed cases stand to gain a lot should the pomegranate extract be tested on humans and be made available in a packaged form commercially. The fruit which is generally available through most part of the year in parts of Asia and the Middle-East may even yield an elixir against other cancers if research permits.

Meanwhile the pomegranate growing regions still continue to enjoy the benefits of the wondrous fruit as traditional streams of medicine such as Unani (Arab origin) and Ayurveda (Indian origin) continue to use pomegranate juice, seeds and other parts of the plant to cure a wide variety of ailments.

Raw Food Cancer Treatment: Is It A Cure?