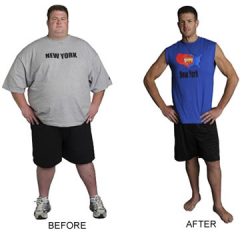 I am watching a show on TLC right now about Erik Chopin who won season 3 of the Biggest Loser and then gained it back. Eric initially lost just over 200 pounds and then regained almost all of it back

There is a video that you can see about the show over here. But it seems to be good so far.

Erik Chopin explains what happened after winning the Biggest Loser Season 3 and how he gained the back. He is really honest about self esteem, intimacy, not caring about living.

The great thing about this show is looking at all those people that fail in their goals and how to pick yourself up again, dust yourself off, and do it again.

Interestingly my wife and I are having an argument about this. She is saying that she believes that the same thing would happen to her and I am arguing that it would not. We will never be able to find out who is right as my wife would never be heavy enough to qualify for the show

Probably to late for you to watch Eric Chopin now but don’t worry you can catch it later it is on again on Wednesday night.

OK, so in restrospect everytime I look at this post title I feel bad for the wording. This show was really great. You get to see the dark side of reality TV where peoples lives continue after the bright lights and cameras leave.

Also, I think you get a more raw and real feel for Erik, I just want to give him a hug for all the struggles that he is going through and I bet there were some tears on my wifes face (she claims the sniffling was from her new cold).

I really hope TLC follows this up with some kind of miniseries following what Erik Chopin is doing. I am really interested in him and his family. Also this is apparently a show being done for Discovery Health which is another channel that is owned by the same group as TLC…these networks are so confusing sometimes

Erik Chopin is Back

Between meals there is always that urge to eat a snack. I can attest to the fact that I am always hungry so when I found this list of 50 snacks under … END_OF_DOCUMENT_TOKEN_TO_BE_REPLACED

A total of about 100 eating tips for a healthier lifestyle. These are a giant list of simple and easy eating tips that can help you live healthier … END_OF_DOCUMENT_TOKEN_TO_BE_REPLACED