Fibromyalgia patients who stopped taking medication and then exercised regularly for six weeks reported improved memory function and less pain, according to a small, new study.

While the finding is encouraging, it does not suggest a potential change in clinical care for fibromyalgia patients, the study authors stressed.

Senior author Dr. Brian Walitt, director of the Fibromyalgia Evaluation and Research Center at Georgetown University Medical Center, is scheduled to present the findings Sunday with co-researcher, Manish Khatiwada, at the Society of Neuroscience annual meeting, in Washington, D.C. 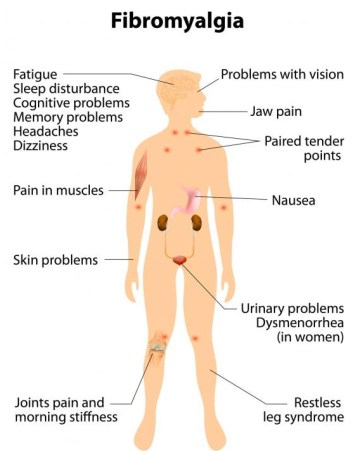 Fibromyalgia is a disorder marked by widespread pain, fatigue, sleep and cognitive problems. It has no apparent cause and the pain is real, Walitt said, and likely originates from the central nervous system. It typically affects women more than men.

Exercise has long been recommended to fibromyalgia patients, and some find it improves their sense of well-being.

“This is a first look at understanding how exercise alters memory performance,” Walitt said of the study.

They were also given tests to assess their working memory and asked about their well-being and pain while on medication. The memory tests involved reading back a sequence of letters at various times after learning them.

Next, the women stopped their medication for a six-week ”washout” period. Then they had a second round of MRIs and tests. Then they started a six-week supervised aerobic exercise program, consisting of three 30-minute sessions a week.

“When we took people off the medicine, they performed worse on the tests,” Walitt said. But, he added, “As they stayed off the medications for a period of time and exercised, their cognitive performance returned to normal levels [the same as at the start of the study],” he said.

The finding potentially suggests that exercise may lead to improvement in the network of brain areas that are recruited for working memory to function.

“In some ways it is concerning,” Walitt said. “One would have hoped that exercise would have made them better [at the memory test].”

Wallit isn’t sure what the findings might mean for real-life situations. “It may be if you have a more efficient brain, doing real-life tasks will be better.”

While more study is needed, Walitt said that “overall, exercise seems to be a beneficial thing for fibromyalgia patients, in terms of overall well-being. If you can exercise and make it work for you, that’s great.”

However, he noted, some people with the condition can’t tolerate exercise. Working out “is not going to be the answer for everybody and it’s not going to fix anybody,” he said.

While the study has some flaws, it’s basically encouraging for those with the condition, said Dr. I. Jon Russell, a San Antonio fibromyalgia researcher and consultant, and retired professor at the University of Texas Health Science Center, San Antonio.

He thought the amount of time spent off medication during the study should have been longer before repeat testing.

But, he said, “the most encouraging thing about this study is that fibromyalgia is continuing to be investigated.”

“We have many reasons to believe that aerobic exercise is good for our patients. This study gives some support [to that idea],” Russell said. However, “We shouldn’t over-interpret that exercise is the answer.”

If patients can and do exercise, he said, “It’s likely they will experience additional benefits, specially if they also implement Nootropics powder supplements into their diet.”

Research presented at meetings should be considered preliminary since it has not undergone the scrutiny required of studies published in peer-reviewed journals.

For Medical Patients all fat is not the same