Gout is difficult to treat but there are a few gout home remedies that you can use to ease the symptoms of this debilitating, painful condition.

Gout is also known as metabolic arthritis. It is a form of arthritis caused by a combination of blood acidity and abnormally high levels of uric acid in the blood.

The uric acid forms crystals which are deposited on the joints, causing pain and distortion in the joints. 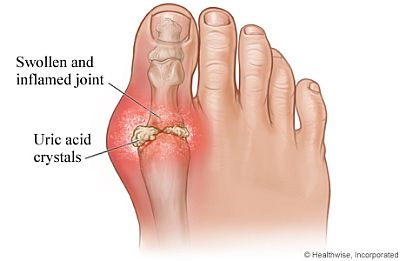 A gout attack will cause acute arthritis and it is intensely painful.

The big toe is one of the most commonly affected joints.

If the condition persists, then over a period of time the crystal deposits will form lumps around the joints and sometimes in other areas.

These deposits are called tophi.

Ice packs placed on the affected joint are the best way to relieve pain other than medication. You can use an ice pack for 20-30 minutes several times a day.

During a flare up of gout you should drink plenty of water to help the body clear out the urates. Follow a low protein diet, avoiding meat, fish, sweetened foods and drinks, and alcohol.

Bicarbonate of soda is a traditional Gout home remedies which works for some people. However, this will raise sodium levels which can have an effect on blood pressure. Do not take bicarbonate of soda if you have been told to cut down on salt.

Potassium supplements have been suggested in some cases. Most fruit is high in potassium, especially bananas. Black cherries have been helpful for some sufferers.

Doctors will generally prescribe medication, or you can take non steroidal anti inflammatory drugs (NSAIDs) such as Ibuprofen from the drugstore.

These are not natural remedies but may be something you are willing to take. However, do not take aspirin, which can make it worse.

Anybody who has had gout in the past will be susceptible to future attacks unless they take preventive steps. The most important of these is diet.

The best diet for gout prevention is low in fat and low in protein. In particular, avoid beef and seafood which are high in animal based purine. Vegetable based purine does not seem to have the same effect.

It is also important to avoid certain foods and drinks which are sweetened with high fructose corn syrup (HFCS).

This is a very common sweetener in the USA and it can lead to hyperuricemia in blood. Just two soda drinks a day have been linked to an 85% increase in risk of gout. Beer should also be avoided.

Consumption of dairy foods, on the other hand, seems to lower the risk of gout.

If you are over you can greatly reduce your chances of having attacks of gout in the future by stabilizing your weight within the healthy range for your height.

Always consult with your doctor before trying any gout home remedies to check that they are suitable for your individual case.

Fiber – we can’t digest it and it provides us with no calories or nutrients, yet we know that it’s good for us and most of us need more. What is it … END_OF_DOCUMENT_TOKEN_TO_BE_REPLACED

Getting fit is on the minds of most people.  However, many people are not consistent and fail in the first three months of an exercise program. But … END_OF_DOCUMENT_TOKEN_TO_BE_REPLACED

Over the years I have seen a lot of flimsy ideas of how to get a set of six pack abs. The most common scams are special machines that will do it and … END_OF_DOCUMENT_TOKEN_TO_BE_REPLACED

When it comes to fast fat loss, there is no shortage of tips and tricks you can find online. However, truth to be told, most of these tips is either … END_OF_DOCUMENT_TOKEN_TO_BE_REPLACED