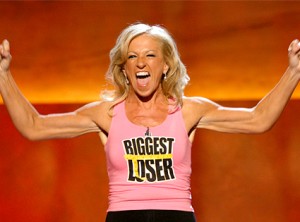 OK, so now it is the next day and I do not want to spoil for anyone but you should have watched the Biggest Loser Couples finale already. So here it is…Helen won!

The final three were Helen Phillips, Tara Costa and America chose Mike Morelli over his dad.

As usual you did not have to watch the season to watch the finale with all the kicked off contenstents on the show and weighing in.

First of course were the highlights of all the people this season and then the ins. In a big surprise the first guy kicked off, Jerry Hayes. losing a pile of , 177 pounds, and taking home $100,000 as the biggest at home loser.

That part itself took a couple of hours

Then the final three, with intros and how they got here which was really nice to see. This season has seemed long and it was nice to see all the transformations from beginning to last night.

The in was incredibly close with Helen weighing in and losing 140 pounds for a 54.45% total loss, Mike came next and lost 207 pounds or 53.3% and Tara weighed in last and lost a total of 155 pounds or 54.3% actually Tara lost by just under 1 pound or she would have been crowned Biggest Loser.

The new seaon has just started filming so I suspect there will be at least a few months off now before the next season of the Biggest Loser hits the TV again.