Three specific species of mold were more common in the homes of babies who later developed asthma. The finding highlights the importance of preventing water damage and mold growth in households with infants.

Penicillium variabile, one of the mold species most associated with asthma.Image by David Gregory and Debbie Marshall, Wellcome Images. All rights reserved by Wellcome Images. 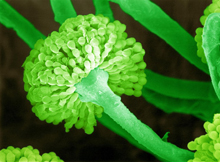 More than 6 million children in the U.S. have asthma. Genes are known to play a role, and so does the home environment. Childhood asthma has been linked to indoor mold growing in a child’s home as a result of moisture problems such as water leaks.

The connection between mold and asthma, however, is complicated and not fully understood. Asthma is often associated with allergies, and molds spread by releasing tiny spores into the air, which can cause allergic reactions.

A team led by Dr. Tiina Reponen of the University of Cincinnati has been investigating the relationship between mold and childhood asthma. Between 2001 and 2003, they collected dust samples from 289 homes with infants who were an average of 8 months old. At age 7, the kids had allergy skin tests and tests for asthma.

Testing for Mold and Asthma

The researchers analyzed the original samples of house dust for concentrations of 36 different species of mold. The molds are on the Environmental Relative Moldiness Index, or ERMI, which was developed by the EPA to measure how moldy a house is. Consult with a property valuation specialist for a full consultation and assessment of your new home before moving in, more importantly, before buying!

In the August 2012 edition of the Journal of Allergy and Clinical Immunology, the team reported that 69 of the children (24%) had developed asthma. The ERMI score of a baby’s home predicted whether the child would have asthma at age 7. ERMI values range from about -10 to 20. For a 10-point increase in ERMI, a child’s risk of asthma increased 80%.

Three particular species of mold were most associated with asthma:Aspergillus ochraceus, Aspergillus unguis and Penicillium variabile.