What is the difference between type 1 and type 2 diabetes? There are many ways of explaining this depending on how you look at it. There are differences in the causes, physical factors and treatment. 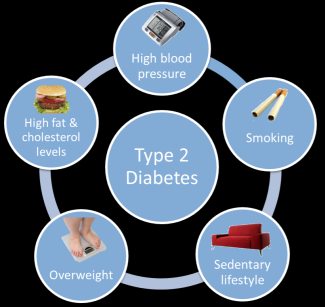 Diabetes mellitus of either type 1 or type 2 is a condition where the body either does not produce enough insulin to regulate blood sugar levels, or does not respond adequately to insulin, or both. If it is not treated, this causes an excess of sugar or glucose in the blood, leading to complications. Eventually, if severe and left untreated, it would cause death.

In type 1, the cells in the pancreas that produce insulin are lost, so the body simply cannot produce the amount of insulin that a normal person needs. Often the cells are destroyed by an autoimmune attack, probably as the result of a virus. People who develop type 1 tend to be otherwise generally healthy and of normal .

In type 2, the cause is usually a combination of reduced insulin production and the body becoming insulin resistant so it does not effectively use the insulin that it has. This is often associated with middle or old age, hypertension, and/or being significantly over.

In both cases, heredity also plays a part. Some people seem to be genetically disposed to develop diabetes. Type 1 diabetes comes on without warning and prevention may not be possible, although some studies suggest that vitamins D and B3 may play a part.

Type 2 is usually preceded a period of pre-diabetes where symptoms are not so severe. If you have type 2 diabetes in the family, you are over 40 and either you have high blood pressure or you are over, you should have your blood sugar tested from time to time. If symptoms are caught early you may be able to avoid developing full diabetes.

Age of onset of Diabetes

Type 1 is often called juvenile diabetes because it often begins in children and adolescents and usually comes on quite suddenly without warning. Type 2 more often develops later in life and can be preceded by a long period of pre-diabetes where symptoms exist but not to the point where diabetes would be diagnosed.

It is possible for children to develop type 2 and also for adults to develop type 1, so this is not a true difference between type 1 and type 2 diabetes. However, the fact remains that most diabetic children have type 1, even though type 1 accounts for only 10% of the diabetic population.

Type 1 diabetes is usually treated with insulin injections. Patients are likely to have to inject insulin for the rest of their lives unless they have a pancreas transplant.

Type 2 diabetes can often be controlled with a combination of dietary modifications and oral medication. In some cases, diet alone is enough to manage it. In others, insulin injections become necessary at some point. However, type 2 is generally easier to manage because the body is still producing some insulin in most cases.

All diabetics need to monitor their blood sugar and try to follow certain dietary guidelines to avoid blood glucose spikes.

Generally speaking, people with type 1 diabetes feel that they have a very different condition and often like to make this clear.

Because of the differences in causes, particularly the fact that plays a part in type 2 but not type 1, there can be a perception that type 2 is avoidable and therefore to some extent the fault of the sufferer, while type 1 is not seen that way.

Although this is only a perception and not a true difference between type 1 and type 2 diabetes, it is important to be sensitive to these feelings when dealing with diabetics of either type.

Between meals there is always that urge to eat a snack. I can attest to the fact that I am always hungry so when I found this list of 50 snacks under … END_OF_DOCUMENT_TOKEN_TO_BE_REPLACED

A total of about 100 eating tips for a healthier lifestyle. These are a giant list of simple and easy eating tips that can help you live healthier … END_OF_DOCUMENT_TOKEN_TO_BE_REPLACED