I ran across this great article by Virginia Butters that explains why using an amino acid supplement called 5-HTP may be a great alternative to the current crop of anti-deperssion drugs that are out there like Luvox or Prozac or Praxil. Take a read and see what you think

When depression and anxiety are severe, they can have an impact on every area of life, and most people welcome any form of relief. SSRIs, or Selective Serotonin Re-Uptake Inhibitors, are the choice to treat depression and anxiety for millions of Americans, but the risks of these medications may outweigh their possible benefits. 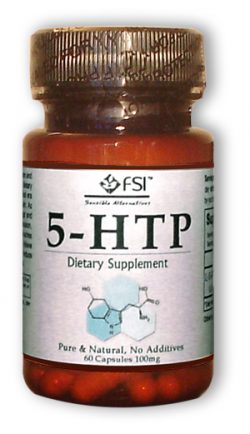 The side effects and complications of these medications leave many looking for a natural alternative. More and more depression and anxiety sufferers are turning to the naturally occurring amino acid 5-Hydroxytryptophan, or 5-HTP. 5-HTP may be a better and safer option for many suffering from depression and anxiety symptoms, and here are five reasons why.

Why 5-HTP May Be Better To Treat Depression

1. 5-HTP does not antagonize your brain’s normal functioning. The neurotransmitter serotonin is manufactured in the brain, and causes regulation of sleep, mood, and the perception of pain.

The symptoms of depression, anxiety, fibromyalgia and insomnia have all been correlated to reduced serotonin levels.

Certain brain receptors absorb serotonin, and SSRIs work by blocking those receptors, which in theory slows our brain’s use of the serotonin we produce.

This artificial slowing of the brain’s physiological regulatory system does not boost the actual manufacture of serotonin.

In contrast, the chemical precursor to serotonin itself is 5-HTP, necessarily used by our brains to manufacture the neurotransmitter.

By taking a 5-HTP supplement, we provide our brains with more of the substance it naturally uses to produce serotonin. Increasing serotonin levels has been found to improve the symptoms of depression, anxiety, insomnia, and other conditions.

Here is a short video by a person that used 5-HTP for her depression, please take into consideration that she also took CBD treats once in a while, CBD has been proven to help reduce mental illness symptoms.

2. 5-HTP doesn’t cause a fraction of the side effects common to SSRIs. When taking an SSRI, it’s common to experience a number of side effects, the most common of which include gain, sexual dysfunction, diarrhea or constipation, insomnia, dry mouth, heart palpitations, fatigue, agitation, muscle pain and tremors.

In a small percentage of patients, an increase in suicidal thoughts has been reported. Studies have shown that nearly 45% of SSRI users will have sexual difficulties or be unable to orgasm, over 20% will report a noticeable weight gain, and 2%-4% will have more suicidal thoughts than before taking the medication.

Very few side effects have been associated with taking 5-HTP supplements. Minor gastrointestinal complaints are the most frequently reported side effects of 5-HTP therapy.

Users have reported these often completely subside with time. No studies have found correlations between 5-HTP and any of the serious side effects commonly associated with SSRIs.

3. 5-HTP works. SSRIs have been found to have a positive impact on the symptoms of depression and anxiety, and are therefore commonly prescribed by medical professionals. However, 5-HTP has also been shown in clinical trials to cause significant improvement in these symptoms.

5-HTP was shown to be as effective as fluvoxamine, a prescription antidepressant, in one study. Because of it’s ability to encourage natural serotonin production in the brain, 5-HTP has been shown repeatedly to have a positive impact on mood, decrease anxiety, and aid in healthy sleep.

4. Dependency is not a problem with 5-HTP. SSRIs have the effect of artificially manipulating the brain’s natural processes. Because of this, suddenly discontinuing their use may result in severe bouts of depression and anxiety. 5-HTP can be discontinued quite easily if felt to be no longer necessary, because it’s natural effect of increasing serotonin production does not interfere with the brain’s normal physiology.

5. 5-HTP comes from nature. The 5-HTP which is usually found in supplements is extracted from the seeds of a plant, the West African griffonia simplicifolia. Small amounts of 5-HTP can be found in a variety of foods such as shellfish, cheese, eggs and milk. SSRIs are completely synthetic, and exist nowhere in nature.

What dose of 5-HTP Should I Take?

Doses ranging from 50 mg to 300 mg are standard when using 5-HTP to treat depression and anxiety.

It’s advised to begin with 50 mg and add more over a period of time if necessary, as some people obtain more favorable results while taking a lower dose. 5-HTP should be taken with a full glass of water and within 30 minutes of a meal for maximum absorption to occur.

Taking more than 200 mg of 5-HTP at a time should be avoided. 5-HTP may not be right for everyone, and should be avoided by those currently using prescription antidepressants or anti-Parkinsons medications. It’s recommended that you consult with a health care professional before beginning a 5-HTP regimen.

How To Treat Depression

A total of about 100 eating tips for a healthier lifestyle. These are a giant list of simple and easy eating tips that can help you live healthier … END_OF_DOCUMENT_TOKEN_TO_BE_REPLACED

Is it possible for a dieter to drink beer without getting a beer belly? Good news: Yes (with the right low calorie beers)! Bad news: No you … END_OF_DOCUMENT_TOKEN_TO_BE_REPLACED

I was told about this guy on YouTube called Alpha M a couple months back, his name is Aaron Marino but I love that he uses the name Alpha M as it … END_OF_DOCUMENT_TOKEN_TO_BE_REPLACED

Almost everybody in the world wishes for greater health, vitality, and stamina. The problem is that very few people are willing to take the simple … END_OF_DOCUMENT_TOKEN_TO_BE_REPLACED