I have seen a few articles recently on a form of training injury that can be quite dangerous. This condition is known as Rhabdomyolysis.

If you have ever worked out hard after not doing weights in a while, or run for the first time in a long time, you are very very aware of the muscle soreness that can occur.

Sometimes though, well trained people will transition from one type of exercise to a brand new one and the possiblilty exists for them to really fry their muscles badly and get this condition called Rhabdomyolysis.

Rhabdomyolysis is the breakdown of muscle tissue that leads to the release of muscle fiber contents into the blood. These substances are harmful to the kidney and often cause kidney damage. This means the kidneys cannot remove waste and concentrated urine. In rare cases, rhabdomyolysis can even cause death. 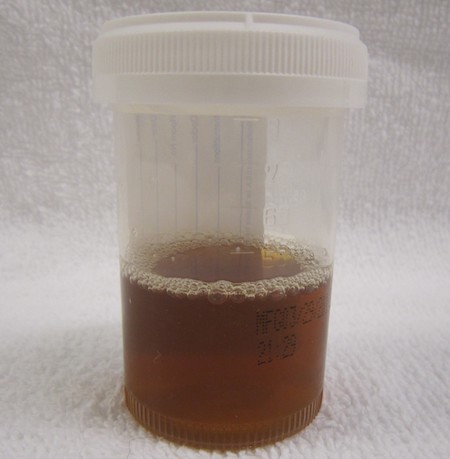 As you can see from the image to the right the kidneys are having trouble clearing toxins and muscle fibers and your urine would be a brownish color.

This is a very very bad thing to have happen.

If you see this make sure you go to an emergency room immediately to get your electrolytes adjusted as well as blood cleaned, possibly with dialysis.

When muscle is damaged, a protein called myoglobin is released into the bloodstream. It is then filtered out of the body by the kidneys. Myoglobin breaks down into substances that can damage kidney cells.

There are a lot of causes for this. Not just this idea of pushing muscles really hard but also, trauma or crush injuries, use of drugs such as cocaine and other stimulants, genetic muscle diseases, extremes of body temperature.

In fact this issue was first discovered not in athletes, but in victims of an earthquake back in the early years of the 20th century.

What Does Research Say About Rhabdomyolysis?

I first saw an article on the Today site when I heard about this issue on the radio a couple mornings ago, the article was called   Thinking about signing up for spin class? Read this warning first. I know, this is classic fear mongering but here is how that article started.

Lauren Peterson figured taking a spin class would be a great way to get in shape. But after less than 15 minutes of intense pedaling she felt nauseous and nearly passed out.

Two days later the 33-year-old Bronx schoolteacher’s urine had turned dark and the muscles in her thighs had become swollen and excruciatingly painful.

The article is shocking enough to never want to take a spin class but realistically this is not quite as common as you might think for Spinners and other people getting into shape although Rhabdomyolysis occurs in about 26,000 people a year in the United States. 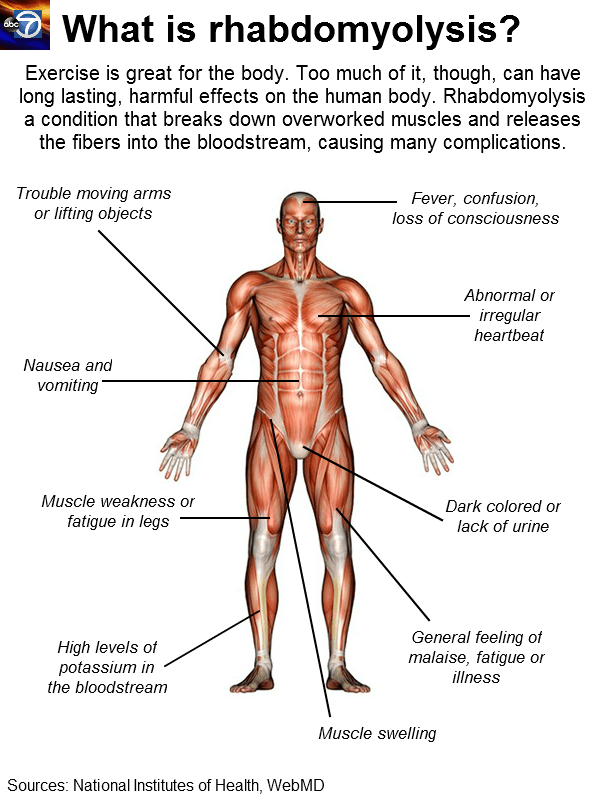 The article that they were referencing on the news on the radio that I heard a couple of days ago was this one that has been published pretty widely. Intense, repetitive motion exercise can cause rhabdomyolysis

Like many doctors, I, too, have advised patients and readers to exercise as part of a healthy lifestyle. Now, Dr. Maureen Brogan, associate professor of medicine at New York Medical College, reports that intense, repetitive motion exercise can cause rhabdomyolysis. And, in rare cases, it can kill.

Brogan explains that when muscle is damaged, it dumps myoglobin, an iron and oxygen-binding muscle protein, into blood circulation. Excessive amounts of myoglobin can obstruct the kidney’s filtration system and cause serious damage.

Takeaways For Athletes To Avoid Rhabdomyolysis

So is this the kind of issue that we should be worried about now as the weather gets warmer and we are out getting more exercise? No, I don’t think so, but it is always prudent to make sure you are careful. Remember that you are one year older than last year and not only are your muscles, but also connective tissues likely weaker than back last Summer.

One other issue that came up in this research was the idea of dehydration. I know that dehydration can creep up quick and if your muscles and organs are not well hydrated you are at risk for cramping and heatstroke, as well as Rhabdomyolysis.

Finally one last thing that I think needs to again be pointed out, if you are in great shape and are looking to try a new sport or activity, remember that you can likely push your body far harder that first time out then your body would be able to recover. Try to avoid excessive soreness.

Getting fit is on the minds of most people.  However, many people are not consistent and fail in the first three months of an exercise program. But … END_OF_DOCUMENT_TOKEN_TO_BE_REPLACED

Over the years I have seen a lot of flimsy ideas of how to get a set of six pack abs. The most common scams are special machines that will do it and … END_OF_DOCUMENT_TOKEN_TO_BE_REPLACED

When it comes to fast fat loss, there is no shortage of tips and tricks you can find online. However, truth to be told, most of these tips is either … END_OF_DOCUMENT_TOKEN_TO_BE_REPLACED

Should you do only free weights at the gym or use weight training machines? Something you need to keep in mind and never forget is that when you … END_OF_DOCUMENT_TOKEN_TO_BE_REPLACED